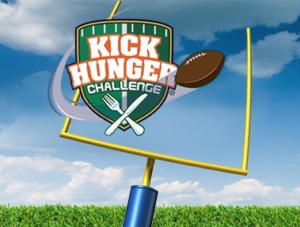 The Foundation was proud to support The Kick Hunger Challenge and work to fight hunger across the country. Elior North America held a fundraising effort for the cause and the foundation was happy to help with a monetary donation.

The Kick Hunger Challenge is a fundraising campaign spearheaded by Taste of the NFL, a 501c3 organization and non-profit dedicated to hunger relief, which has rallied chefs from across the country and some of the NFL’s greatest players to raise money in support of food banks throughout the United States. 100% of the money donated to the Kick Hunger Challenge is distributed to the local food bank chosen by the contributor. Elior North America provides food services and catering to more than 1,300 client accounts in five industry segments across the continental United States.